In their book, Half the Sky, Nicholas Kristof and Sheryl Wudunn tell the story of an Indian neighbourhood – Kasturba Nagar – a place where the inhabitants are Dalits (Untouchables) and the lanes run with sewage and desperation.

For almost fifteen years, Akku Yadav and his gang ruled the slum with weapons of terror.  They robbed, tortured and murdered at will – much of the time choosing rape as their preferred method of controlling the people.  In this area rape is so stigmatizing that the victims often remained silent, which allowed Akku Yadav to act with impunity.  The few that reported the crime were ignored by the police.

The slum-dwellers say Akku Yadav once raped a woman right after her wedding and that he and his gang dragged another woman – who was seven months pregnant – into the street where they raped her in public view.  They also gang-raped another woman just ten days after she’d given birth – that woman was so humiliated she killed herself by dousing herself with kerosene and setting herself on fire.

In addition to the rapes, Akku Yadav once stripped a man, burned him with cigarettes and made him dance in front of his sixteen year old daughter and tortured a woman by cutting off her breasts and cutting her to pieces in front of her daughter and neighbours.   One man, Avinash Tiwari, planned to go to the police, so Akku Yadav butchered him as well.

The inhabitants were terrified of Akku Yadav.  25 families moved away but most had no hope of escape, so they took their daughters out of school and hid them in their houses to try to protect them. And the police didn’t help – as long as Yadav targeted Dalits they didn’t interfere.

Usha Narayane is from this neighbourhood but her parents 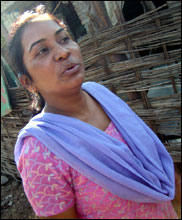 struggled and saved all their lives to educate her and her siblings.  She has a degree in hotel management and was due to begin work when she went home for a visit.

Akku Yadav was rampaging as usual.  He raped a thirteen-year-old girl and then he and his men went to the neighbours of the Narayanes to demand money. The gang broke up the house and threatened to kill the family.  The neighbours were too terrified to act, so Usha went to the police to file a complaint for them.

The police told Akku Yadav what she had done and he and 40 men surrounded Usha’s house.  Yadav had a bottle of acid and he shouted at Usha to back down.  She barricaded herself inside and called the police – but they didn’t come.  So Usha turned on the gas in her house and told Yadav if he came in she’d blow them all up.

The neighbors were unsure what to do but when they saw Usha fighting back it gave them courage and they hurled sticks and stones at Yadav and his men.  The gang ran off.  The Dalits were ecstatic – for the first time ever they had defeated Akku Yadav and his men. The slum-dwellers burned down Yadav’s house and he was arrested for his own protection.

Akku Yadav’s bail hearing was scheduled and rumour had it that he’d bribed the police and was going to be released.  The hearing was set for a court miles away in Nagpur. Hundreds of Dalit women marched to attend. Akku Yadav strutted into court, confident and unrepentant. He saw a woman he had raped and called her a prostitute and said he’d rape her again. She ran forward and hit him with a slipper and then all the women came forward and surrounded him screaming and shouting.  They threw chili powder at the police guarding him and then the women pulled out knives and began to stab Akku Yadav.  They had agreed that each of them would stab him at least once.  They killed him and cut off his penis and then marched back to Kasturba Nagar. The slum had a party – the monster was dead.

Everyone knew Usha Narayane had orchestrated the murder but she wasn’t in court that day and though she was arrested nobody could prove her involvement.  The woman had decided if they all stabbed him no one wound – or one woman – could be said to have killed him.  A public outcry followed the murder of Akku Yadav and the plight of Kasturba Nagar became public.  A retired high court judge took the part of the women saying they’d sought help from the police and had been abandoned.

This is the type of story that clearly demonstrates to me the type of moral dilemma that plagues our world.  Akka Yadav had clearly caused immense suffering and was no loss to humanity.  The police were corrupt and the Dalits had no recourse to justice.  One has to wonder if it is just to allow suffering to continue.  Or to allow the tyrant to thrive.

Perhaps it’s the savagery of the attack but somehow the solution feels wrong as well.  It reminds me of war. But having said that – what else could they do?

I don’t know the answer.

What do you think?