And those who were seen dancing were thought to be insane by those who could not hear the music.  – Friedrich Nietzsche

It’s easy to believe in war and injustice

in greed and corruption

in hatred and prejudice and violence.

It’s harder to believe in equity and justice and unity and peace.

But once upon a time…

Slavery was the norm – nobody thought it unreasonable that one human being own another.

Everybody believed women were inferior to men.

White people were genuinely thought to be superior to everyone else.

Appendicitis was usually a death sentence…

All change happens because at the very, very start someone believes it is possible.

We see what we believe so if we believe something is possible then we will search and search until we find the way to make it a reality – for better or worse.

So – while peace, love, understanding, equity, and justice might not be that easy to envisage, the first step in attaining any of those things is to believe they are attainable.  Strain your ears until you hear the music and then – dance… 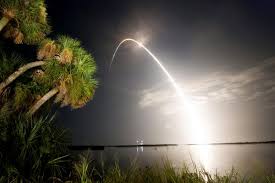 This is a list complied from your comments on the qualities you admire.

Photograph – The trail of NASA’s space shuttle Discovery creates a bright arc in the sky over Florida following a successful night launch on August 28, 2009.

There is no tool for development more effective than the education of girls.
Kofi Annan, former UN Secretary General The first step in changing our world is an examination of what actually constitutes reality. We are all products of our environment and as a result we inevitably take many things for granted, believing them to be the natural order of things. As a result of this tendency, slavery, child labour, the subjugation of women and certain classes and the assumed superiority of specific races were all at one time – and unfortunately in some quarters still are – considered to be ‘the natural order of things.’ As Sir Ken Robinson, the British campaigner for educational reform says,

…we don’t see the world directly. We perceive it through frameworks of ideas and beliefs, which act as filters on what we see and how we see it. Some of these ideas enter our consciousness so deeply that we’re not even aware of them. They strike us as simple common sense. They often show up, though, in the metaphors and images we use to think about ourselves and the world around us. (1)

So what if many of the things we take as unshakeable realities aren’t fixed in some unalterable way but rather exist because we allow them to exist?

Social reality is an expression of human agreement, someone is the president of a country and has the powers of that office because a system of government is created and acknowledged by the inhabitants of that country. When the fundamental agreements which frame belief and behaviour change, social reality will change.(3)

The idea of Cultural Hegemony was developed by the Marxist philosopher, Antonio Gramsci in the early twentieth century.(4)  Gramsci, who spent much of his life in one of Mussolini’s prisons, raises some interesting questions about the nature of what we consider reality.

In a cultural hegemony everybody comes to believe that the way things are is the natural order of things. The ideas and values of the ‘ruling class’ are seen as the norm and their ideologies are believed to benefit everybody – whilst of course, really only being of benefit to the ruling class. Gramsci suggested that cultural norms (which vary from society to society and time to time) must not be perceived as either “natural” or “inevitable”, but rather that these cultural norms – institutions, practices, beliefs – should be investigated and reassessed to assist in establish greater social and economic equality.

According to Gramsci, people concentrate on living their lives in a way that is meaningful to them within their personal circumstances and as a result the rest of society seems to have little or nothing to do with her or him. But Gramsci would contend that each person’s life also contributes to making the social reality in which they live. (5) He maintained that this is how many systems are upheld because we come to think of them as the natural order of things – literally, as ‘common sense.’ We see the society around us as being the only way things can be and any attempt to change it is seen as is a ridiculous proposition which flies in the face of common sense.

Take slavery. There was a time in the Western world when slavery was considered ‘the natural order’ of things. Certain people were seen as a slave class and were owned by other people. The social practices of the time were built around this idea and nobody – even the slaves in all likelihood – thought there was anything that could be done to change this ‘reality.’ Slavery was so much part of social reality that wishing to escape from it was seen as an illness.

In 1851, American physician, Samuel A. Cartwright delivered a widely reprinted paper to the Medical Association of Louisiana, this paper was on the subject of a mental illness called drapetomania – an illness he believed afflicted slaves who were inclined to run away. Cartwright said this illness was a result of masters who, “made themselves too familiar with [slaves], treating them as equals.“(7)

He went on to say that,

“If any one or more of them, at any time, are inclined to raise their heads to a level with their master or overseer, humanity and their own good requires that they should be punished until they fall into that submissive state which was intended for them to occupy. They have only to be kept in that state, and treated like children to prevent and cure them from running away.“(8)

This example appears shocking to the 21st century Westerner as it is clear to us now that slavery is not the natural order of things but rather a social reality based on economic motives and mistaken ideas. But more useful than being shocked at the behaviour and beliefs of our ancestors, would be the realisation that we are just like them. People – like us – made that reality and people – like us – changed that reality. This is just as true of the many dysfunctional social realities we live with today as it was true of slavery. Dishonesty in governments and finance, poverty, abuse of women and children, lack of education and opportunity for the majority of the people on the planet – these are examples of social realities constructed and supported by us and therefore within our control. Just like slavery.

So how do we distinguish between immutable reality and changeable reality? If we want our societies to improve we must be willing to contribute to improving them. And if we want to do this we must begin by investigating social reality for ourselves. We have a responsibility – as well as a right – to look at everything rather than just accepting what we see around us as unchangeable.

Mount Everest and the Atlantic Ocean belong to a type of reality that the philosopher John Searle(9) calls ‘brute’ reality. We obviously don’t create brute reality – though we do seem able to destroy it. Social reality is something different. We don’t make mountains and trees but we do make social reality – or at least we all help to make it and so we can all help to change it.

Assessing everything does not mean that we should necessarily reject all we find – it just means that we should actively choose for ourselves. If we simply reject everything this is just the flip side and therefore equally limited and limiting. Truly examining reality is only possible if we try to see with our own eyes. If we put aside not only our prejudices against everything but also our attachment to everything and try to make all of our decisions independently and with justice. We won’t be protected from making mistakes in this process but if we are more interested in discovering truth and justice and reality than we are in supporting any systems or persons, that in itself will protect us, as it will allow us to see our mistakes, rectify them and move on towards solutions.

Recognising that there may be things distorting or blocking our view of reality won’t make the obstacles disappear any more than just knowing you are short-sighted will fix your vision. However, diagnosing the problem not only allows you to take it into account, it may also allow you to find ways to improve your vision.  In order to do this, the first – and possibly the only truly vital step – is to begin to see ourselves as co-creators of the social reality rather than just its victims or beneficiaries.

1 Rethinking Prosperity: Forging Alternatives to a Culture of Consumerism – Bahá’í International Community’s Contribution to the 18th Session of the United Nations Commission on Sustainable Development – 3 May 2010, New York, New York