It’s all about perspective.

It’s indispensabile in our quest for truth.

It’s vital for our ongoing safety and security.

And most of all it’s absolutely irreplaceable in the pursuit of personal and societal happiness.

In every sense perspective helps us get the whole picture.

And nothing delivers perspective better than films like this (well, for me anyway)…

In 1999, Sugata Mitra – now Professor of Educational Technology at Newcastlle University in the UK, was working in Delhi when he had a crazy idea.

The complex in which he worked was surrounded by a slum and he wondered what would happen if he embedded an internet-enabled computer in the wall of the complex at kid-height, so that the children running around outside could reach it?  Would the children ignore the computer?  Break it up?  Or – most unlikely of all – would the children learn to use the computer? (Preposterous notion given that these were slum children who hardly ever went to school, never saw the internet and didn’t speak or read English)

So – what do you think happened?

Have a look for yourself.

P.S. – Fun fact – when Vikas Swarup read about Sugata Mitra’s experiment he began to think about slum children educating themselves and was inspired to write Q&A – the novel that was adapted to become Slumdog Millionaire.

As I said.  Maybe everything doesn’t have to be so hard?

Maybe all we need to do is find our natural position in the world and then lean into it?

Maybe that’s what it takes to blossom?

I know that’s easier said than done.  I know it can be hard to feel that what we have, naturally, to give to the world is what the world needs from us the most.

I know that in a world that constantly advertises its vacancies for people who are prettier than we are, or smarter, or thinner, or richer, or faster or fleeter of foot than we’ll ever be, it is hard not to see ourselves as inadequate.  Not to try to be some of those things that the world seems to want us to be.

But maybe you and I are wasting our precious time here trying to become something we aren’t?

Maybe that energy would be better employed working out who exactly we already are and what we can already do and then developing that? No matter what the world thinks?

Have a look at Rory McIlroy in the clip below.  I wonder if those commentators would have seen then, what they see now?

To see things in the seed, that is genius – Lao Tzu

(P.S. – this video is also for my husband and children – bet you never thought I’d use a golf example, guys…)

Dirk Willem Venter –
Even though this photograph was taken almost fifteen years ago, the day I met Mr. Mandela still stands out in my memory. I heard many stories of how lucky we were to have a great man such as him as our president and although I was very small, I felt a deep awe at being lucky enough to meet him face to face. As time passed and his distinctive voice filled my ears my understanding about what a blessing he was for our country grew.
He visited Worcester for the official launch of the Blue Train. I was selected from a group of students from my school to hand him a gift. I remember being nervous and a little apprehensive as I didn’t know what to expect when meeting such a great man. He did not talk down to me as grown up to kid, but instead smiled and told me how happy he was to meet me and my fellow students from the Pioneer school.
I did not know it then, but meeting him truly changed my life. I am one of only three completely blind students in the country to study BSc Computer Science. His example taught me to never give up and never regard myself too highly above others.

Nature or nurture?  Are we empty vessels waiting to be filled with knowledge and virtues or is there at least some stuff we might already have inside us that could be accessed?  A seam of gold?  A mother lode of virtue?

Perhaps if we had a little confidence that the good is there, deep inside – especially in children – we’d be pleasantly surprised?  And more likely to find it.

Do you love your children?  For most of us the answer is Yes.

Do you sometimes make them do things that are unpleasant – or even painful – for their own good?

Again the answer is Yes and we do this because we love them, don’t we?

All the doctor and dentist appointments.  The homework and discipline and training in the face of reluctance and protest.  But parents suck it up because they know it is for the future well-being of their child.

My niece had very serious scoliosis and had two extremely painful surgeries when she was just 13.  I am happy to say that they were fantastically successful surgeries but there were no guarantees beforehand and they did involve a lot of pain and suffering for her whole family – and especially for her.

What would you do to prevent your child being ostracized, cut off or rejected?  If she might be condemned to never being respectable.  Never finding a husband.  Never having a family of her own.  You’d do a lot – most of us would – even if it was a risky and painful road, we’d be frightened not to take it.

It takes immense courage to stay with what you know to be true in the face of social pressure and tradition.  What if you are wrong?  It’s a scary place to be.

We can’t always trust our gut.  Our gut will tell us to fit in and do whatever the herd does because there’s ‘safety’ that way.  The people in this video are showing magnificent courage.  Their capacity to hold fast and stay with the truth even while they recognise the pressure around them is inspiring. 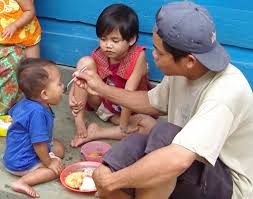 from outside. Experts try to persuade people to adopt new ways and often look for charismatic locals to lead the change.

A newer model, Positive Deviance, tries to approach the idea of change from a different angle.

In the struggle to achieve participation and not simply persuasion, it has been found that local wisdom will usually be better than outside expertise.  This model also proposes that if people can be brought along as participants, even the most intractable problems can be solved.

In 1990, Jerry and Monique Sternin arrived in Hanoi to open a branch of the U.S. NGO, Save the Children.  At that time two-thirds of Vietnamese children under five were suffering from malnutrition. The Sternins hoped to find ways to help with this as supplemental feeding had already failed.

They initially travelled to the Quong Xuong District. There they weighed 2,000 children under the age of three and discovered that 64% of them were malnourished.  The Sternins weren’t the first people to discover this but they were the first to ask a very important question.

Were any of the well-nourished children they had encountered from very poor families?

The answer was ‘yes.’  Some of the children were well nourished even though their families were just as poor as those of the malnourished children.  These families were exhibiting positive deviant behaviour.

So the Sternins studied them.  What were they doing that was so different?

Now they knew the key to the nourishment of the local children but how would they convince the villagers? They struggled to come up with ideas until a village elder reminded them of a local saying – “A thousand hearings isn’t worth one seeing, and a thousand seeing isn’t worth one doing.”

The Sternins designed a pilot project where local mothers agreed to work for two weeks with the ‘positive deviant’ mothers, harvesting the shrimps and greens, encouraging the children to eat, feeding them more often and washing their hands.

They were at all times encouraged to ‘do.’  They weighed their children every day and plotted the data on their own charts.  Within two weeks they could see the changes in their children for themselves.

This pilot project continued for two years after which malnutrition had decreased by 85% where the Positive Deviance approach was implemented.  Over the next several years this approach was used all over Vietnam and helped more than 2.2 million people improve their nutritional status.

The interview below is with Monique Sternin and demonstrates not only the success of this project but also beautifully shows how much the way we interact with others – all others – impacts on the outcome.