The beauty of some stories is that they are telling one story when they seem to be really telling another.

Take the Aeneid for example. Virgil wrote the Aeneid c. 29-19 BCE – in other words over two thousand years ago. He wrote it to glorify Rome and to give the Roman people a pedigree of greatness – to claim them as the descendants of the defeated Trojans. But the Aeneid is not just the story of a defeated – or even glorious – people.  It is the story of people.

Dido is tricked by the gods into falling in love with Aeneas – but fall in love she does. Against her better judgement – and contrary to her loyalty to the memory of her dead husband – she and Aeneas become lovers.

And then Aeneas leaves.

He can’t stay in Carthage because he is destined to lead his people to Italy to found the Roman nation and so he is commanded by the gods to leave Carthage. Leave Dido.

Dido can’t bear it. Insane with loss of love and loss of self-respect and loss of hope for the future she kills herself with a sword Aeneas has left behind.

Virgil portrays Aeneas not as a cad but as a dutiful man who has to get on with his mission and, therefore, must leave Carthage. As we read the Aeneid we are certain Virgil thinks it would be much worse if Aeneas stayed in Carthage and neglected his duty.  Even so, Virgil describes Dido and her love for Aeneas with tenderness and sadness.  He describes her as a good, and up to this point, dutiful woman and not – as is so common in literature – as a seductive she-devil. It is the sweetness and not the evil of Dido’s love that distracts Aeneas from his mission.

As Book Four of the Aeneid progresses, Virgil describes Dido’s anguish, her growing madness as the Trojans prepare to leave. With Virgil we feel her desperation, her unbearable distress and longing for release and then we feel the pain of Anna, Dido’s sister, who discovers her beloved sister on a pyre with a sword plunged into her body.  Virgil shows us Anna, crying and holding the bleeding body of Dido as she dies.  Even the goddess Juno is moved by Dido’s suffering and sends a messenger to take a lock of Dido’s hair so that her pain can end, though her death is not meant to be.

Virgil elicits our sympathy for Dido and her pain and though he has a two thousand year old view of Dido and Aeneas as pawns of the gods not fully in charge even of their own decisions, he never once characterises them as other than human. Virgil shows us the big picture and all the small pictures that exist inside it.  He describes each part of the picture as a section of reality that doesn’t negate or nullify any other part but rather contributes to the overall truth. Rome was founded on glory but also on sadness and sacrifice and pain. Like a huge mosaic picture made up of individual pictures.  It’s a richer picture.  We could learn from it.

This talk is officially called Tan Le – My Immigration Story – and it is that, an immigration story, but it is also much, much more.

It is a story of tradition and war and fear and upheaval, a story of displacement and escape, a story of love and hope and perseverance and family and hardship and the forging of a human spirit.

Although the world is full of suffering, it is also full of the overcoming of it. – Helen Keller

The poverty of our century is unlike that of any other.  It is not, as poverty was before, the result of natural scarcity, but of a set of priorities imposed upon the rest of the world by the rich.  Consequently, the modern poor are not pitied…but written off as trash.  The twentieth-century consumer economy has produced the first culture for which a beggar is a reminder of nothing.

I was very taken with it.  In particular, I was taken with the idea of, ‘the modern poor’, being, ‘written off as trash.’

Do we blame people for being poor as though it is always an action they have taken or a choice they have made?

I suspect we do.

But I don’t know why.

General information about the FSA/OWI Color Photographs is available at hdl.loc.gov/loc.pnp/pp.fsac

As the daughter of a nurse I had some vague idea of what a fistula might be (my mother always liked to tell us the ‘real’ name for everything.)  A fistula is a hole – usually a tear – between organs.  To be honest, I can’t say that I was all that aware of obstetric fistulas.

An obstetric fistula is a tear that develops between the rectum and/or bladder and vagina as a result of prolonged or severe childbirth.  The physical result of this tear is that woman – many of them teenagers too young to be physically capable of giving birth without medical intervention – leak urine and feces all the time.  The social result of this is that they are usually divorced and ostracised. Because they smell bad, they are forced to live in huts at the edge of their villages where they starve or die of infection.

“The woman with a fistula is the modern day leper,” as a healthcare worker describes the situation.(1)

Obstetric fistulas were not unknown in Europe and America – for example, the present day site of the Waldorf-Astoria Hotel in Manhattan, was once the site of the Women’s Hospital of New York, which specialised in fistula repair until it closed in 1928. (2)

Since the early twentieth century in the Western world, the condition of obstetric fistula has been relegated to obscurity by the availability of medical intervention in childbirth. Obscure enough that this nurse’s daughter was never warned about them by her mother.

This is not the case for thousands of other women around the world (regardless of who their mothers may be).  They know exactly what an obstetric fistula is and all about the devastation it wreaks on a life. 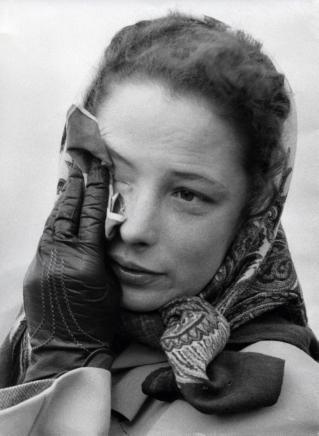 Evil causes suffering and evil is preventable, but even in a paradisiacal world without evil, suffering would still exist.

In the most wonderful and peaceful of worlds, completely free of war and violence and famine and prejudice, children will still die and be bereaved, people will become ill and have accidents, make mistakes – there will be natural disasters and unfortunate events. Suffering will still exist.

So.  What is the point of suffering?

Viktor Frankl, concentration camp survivor and author of Man’s Search for Meaning, said that suffering should be alleviated whenever possible but when it isn’t possible it presents us with an opportunity for change.

When we are no longer able to change a situation – we are challenged to change ourselves. (1)

What does this mean?  Perhaps it means that suffering changes us anyway and we can either be a part of that change or allow ourselves to be formed against our will by circumstances outside of our control?

Maybe the purpose of suffering is so incredibly individual that there is no one answer other than that its very inevitability suggests it does have a purpose – however hidden?

Maybe it exists so that we’ll question the things around us that seem real and permanent and important and learn to distinguish between them?

Maybe our suffering can soften our hearts so that when we see others suffer we respond?

I don’t presume to know.