What does it mean to be true?

Definitions of ‘true’ include –

In accordance with fact or reality. Accurate or exact.(1)

So, does that mean being ‘true’ is simply a frills-free declaration of every whimsical thought that flits through my head? ‘That makes her look fat’, ‘What a dumb thing to say’, ‘I hate those shoes’.

Or is it something else entirely?

Other definitions of ‘true’ include – Exactly in tune, correctly positioned, upright, level. (2)

Same question then – what does it mean to be ‘true’?

However, if I say something and do something different – e.g. say I believe in kindness and then act unkindly – I am definitely not being ‘true’ because there is a discrepancy between my words and deeds. My actions are – out of tune, not ‘on the level’, not in accordance with reality. Definitely not ‘true.’

Which suggests being ‘true’ is the opposite to this.

Let deeds, not words, be your adorning.(3)

Ticks all the boxes?

If a virtue is something difficult to maintain and necessary for the flourishing of  human society – then hopefulness qualifies.

It can be hard to keep going in a world where there is so much suffering in evidence.

It can be disheartening when the bad guys seems to win and the good guys go to the wall.

It can be difficult, as you grow and gain experience in the world to hold onto hope.

Most of the important things in the world have been accomplished by people who have kept on trying when there seemed to be no hope at all. ~ Dale Carnegie

Our brain is a story of two halves – two hemispheres – left and right.

Even though each lobe is dominant in some areas, each also has an application in areas that appear to be none of it’s business.

For example, if we want to be regulated emotionally, we must use our capacity for logic, while equally, if we want to make good decisions, we need to include our emotional capacities.

In this video, Dr. Dan Siegel – a pioneer in the field of interpersonal-neurobiology –  describes the importance of balance between the hemispheres and the surprising outcome when it is achieved.

General information about the George Eastman House Photography Collection is available at www.eastmanhouse.org/inc/collections/photography.php.

It was six men of Indostan

To learning much inclined,

Who went to see the Elephant

(Though all of them were blind),

That each by observation

The First approach’d the Elephant,

And happening to fall

Against his broad and sturdy side,

At once began to bawl:

“God bless me! but the Elephant

The Second, feeling of the tusk,

Cried, -“Ho! what have we here

So very round and smooth and sharp?

To me ’tis mighty clear

This wonder of an Elephant

The Third approached the animal,

And happening to take

The squirming trunk within his hands,

Thus boldly up and spake:

The Fourth reached out his eager hand,

And felt about the knee.

Is mighty plain,” quoth he,

The Fifth, who chanced to touch the ear,

Can tell what this resembles most;

Deny the fact who can,

This marvel of an Elephant

The Sixth no sooner had begun

About the beast to grope,

Then, seizing on the swinging tail

That fell within his scope,

And so these men of Indostan

Each in his own opinion

Though each was partly in the right,

And all were in the wrong!

So oft in theologic wars,
The disputants, I ween,
Rail on in utter ignorance
Of what each other mean,
And prate about an Elephant
Not one of them has seen!

Have you ever noticed how contagious emotions can be?

Research shows that positive emotions are the most contagious and that laughter – in particular – spreads like wildfire.  The fact is that laughter is both universal, and universally trusted.

As everybody knows – you can fake a smile, but not a laugh.

In neurological terms, laughter represents the shortest distance between two people because it instantly interlocks limbic systems.*  This immediate, involuntary reaction, as one researcher puts it, involves, “the most direct communication possible between people – brain to brain – with our intellect just going along for the ride – in what might be called a, ‘limbic lock.’ (1)

In film and media, a trope is a common pattern in a story or a recognizable attribute in a character that conveys information to the audience.

In a New York Times article she wrote in 1991, the poet, Katha Pollit, identified a common problem with the portrayal of women in film and TV – there aren’t enough of them. 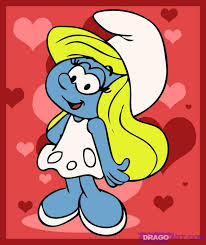 Pollit pointed out that even though women (obviously) make up half the population of the world, works of fiction with an ensemble cast – TV and film in particular but also books to some extent – very rarely have a 50/50 balance.  Indeed most often there is just one female added to the mix.

She named this The Smurfette Principle.

So what are the possible consequences of this scarcity of female characters in popular culture? Pollit suggests that this tendency has a huge impact on both boys and girls –

Little girls learn to split their consciousness, filtering their dreams and ambitions through boy characters while admiring the clothes of the princess. The more privileged and daring can dream of becoming exceptional women in a man’s world — Smurfettes. The others are being taught to accept the more usual fate, which is to be a passenger car drawn through life by a masculine train engine. Boys, who are rarely confronted with stories in which males play only minor roles, learn a simpler lesson: girls just don’t matter much. (1)

The Smurfette Principle holds true across the board, from Sesame Street and the Muppets to movies and TV programmes aimed at adults.

The message is clear. Boys are the norm, girls the variation; boys are central, girls peripheral; boys are individuals, girls types. Boys define the group, its story and its code of values. Girls exist only in relation to boys…”Let’s play weddings,” says my little niece. We grownups roll our eyes, but face it: it’s still the one scenario in which the girl is the central figure. (2)

There are exceptions to this (I knew there was a reason I loved Buffy!) but they’re rare. 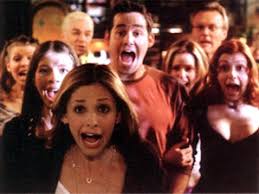 Now that I know about the Smurfette Principle I can see it everywhere – awareness is powerful.

It really makes you think…

The Universe has as many different centres as there are living beings in it.  Each of us is a Centre of the Universe… 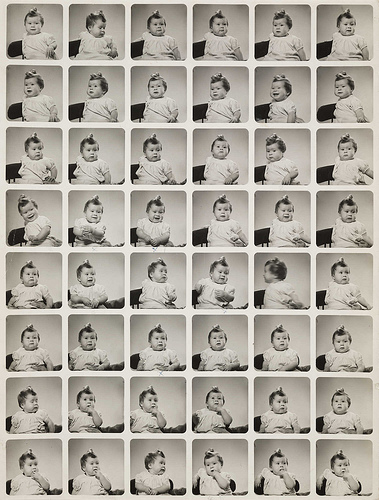 Humans are social beings.  We’re not the only ones on the planet but we most definitely belong to that group.

Our interactions with other people do more than just shape our manners and our view of the world, these interactions actually shape our physical brains.  As the saying goes, neurons that fire together, wire together.

As we lumber about in our lives, we often believe, erroneously, that only our big actions count.

If I don’t hit you or shout at you or curse or show my disdain I can tell myself I haven’t revealed anything of myself – or done any damage to you.

But what if that isn’t true?

What if our sensitivity to response is so ingrained in us and so long-standing that we don’t consciously recognise how subtly influenced – or influential – we can be?

Everybody knows that new-born babies respond to the world around them and we instinctively try to interact even with the youngest babies.  But do we realise how vital this seemingly trivial interaction really is?

Watch the video below – if you can handle it – it tells a very interesting story.

Evil causes suffering and evil is preventable, but even in a paradisiacal world without evil, suffering would still exist.

In the most wonderful and peaceful of worlds, completely free of war and violence and famine and prejudice, children will still die and be bereaved, people will become ill and have accidents, make mistakes – there will be natural disasters and unfortunate events. Suffering will still exist.

So.  What is the point of suffering?

Viktor Frankl, concentration camp survivor and author of Man’s Search for Meaning, said that suffering should be alleviated whenever possible but when it isn’t possible it presents us with an opportunity for change.

When we are no longer able to change a situation – we are challenged to change ourselves. (1)

What does this mean?  Perhaps it means that suffering changes us anyway and we can either be a part of that change or allow ourselves to be formed against our will by circumstances outside of our control?

Maybe the purpose of suffering is so incredibly individual that there is no one answer other than that its very inevitability suggests it does have a purpose – however hidden?

Maybe it exists so that we’ll question the things around us that seem real and permanent and important and learn to distinguish between them?

Maybe our suffering can soften our hearts so that when we see others suffer we respond?

I don’t presume to know.

The Spirit Level : Why Equal Societies Almost Always Do Better – a controversial book by Richard Wilkinson and

Kate Pickett, makes the claim that inequality has a negative effect on the majority of the population – not just the poor.

According to the authors, in states and countries with a big gap between the rich and poor, mental illness, drug and alcohol abuse, obesity and teenage pregnancy are more common, the homicide rate is higher, life expectancy is shorter, and children’s educational performance and literacy scores are worse.

According to this data, Japan and the Scandinavian countries have the smallest differences between incomes, and the best record of psycho-social health. On the other hand, the widest gulf between rich and poor – and the accompanying highest incidence of health and social problems – is to be found in Britain, America and Portugal.

One explanation, suggested by the authors, is that inequality increases stress right across society, not just among the least advantaged. Much research has been done on the stress hormone cortisol, which compromises the neural system and in turn the immune system. When stressed, we are more prone to depression and anxiety, and more likely to develop a host of bodily ills including heart disease, obesity, drug addiction, liability to infection and rapid ageing.

Societies where incomes are relatively equal have lower levels of stress and high levels of trust, so that people feel secure and see others as co-operative. In unequal societies, by contrast, the rich suffer from fear of the poor, while those lower down the social order experience status anxiety, resentful of those more successful than them and ashamed of themselves.

According to Wilkinson and Pickett, social problem often create downward spirals – for example, babies with teenage mothers are at greater risk, as they grow up, of educational failure, juvenile crime, and becoming teenage parents themselves. In societies with greater income inequality, more people are sent to prison, and less is spent on education and welfare.

This is an interesting book.  Lots of people disagree with it, dispute the statistics the authors present and deny their conclusions. But perhaps the title of the book – The Spirit Level – Why Equal Societies Almost Always Do Better –  still makes a statement with which most of us would instinctively agree.

Our approaches to how this should happen might differ, but almost all of us would prefer to live in a just and equal society, given the choice.